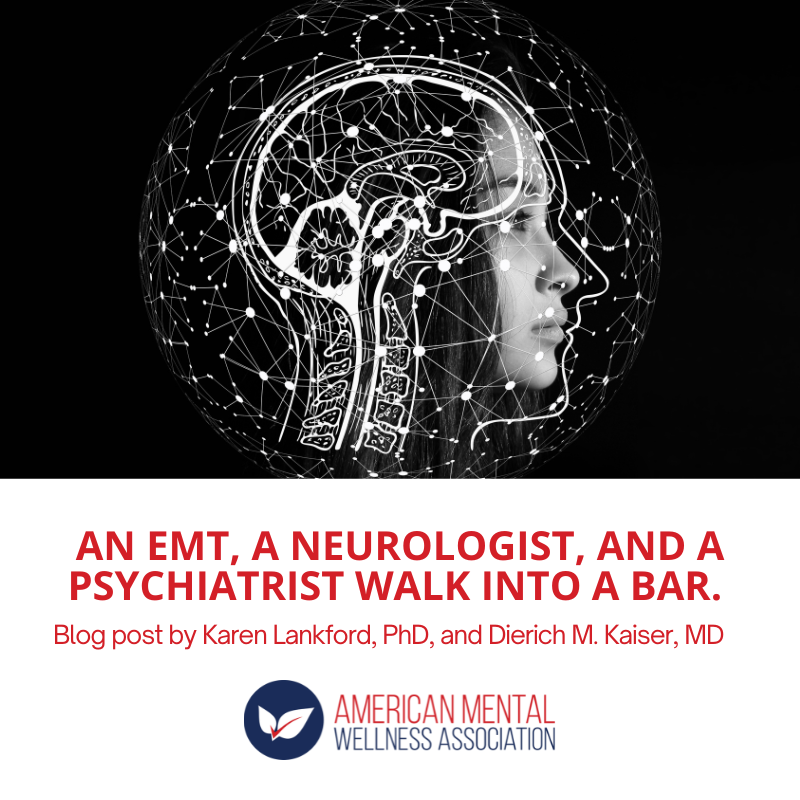 An EMT, a Neurologist, and a Psychiatrist Walk Into a Bar | Karen Lankford, PhD, and Dierich M. Kaiser, MD

An Emergency Medical Technician (EMT), a neurologist, and a psychiatrist walk into a bar.

While they are nursing their drinks, the bartender suddenly drops the glass he is holding, half of his face seems to kind of melt, and he falls onto the floor.

The EMT immediately jumps across the bar and shouts: “Call 911!” and he begins checking the bartender’s airway and pulse.

The neurologist follows a minute later, pulling out his pen light to check the patient’s pupils and shouting, “Call the emergency room at the hospital tell them to make sure the MRI is free to start a scan and give the on-call neurosurgeon a heads up in case we are dealing with a hemolytic rather than a thrombolytic stroke!”

The psychiatrist calmly finishes his beer, takes out his business card, hands it to the neurologist and says, “Have him call me when he gets out of the hospital.”

I am not good at telling jokes. However, this unfunny story reflects an unfunny reality.

After someone has been rushed to a hospital and the initial problem has been diagnosed and treated, then the hard part begins. In the case of a brain injury, recovery is usually long and slow. Furthermore, in addition to the more obvious motor and/or sensory impairments, most patients also experience neuropsychiatric problems such as anxiety or depression. These patients are not depressed about their disabilities or anxious about their health. They are depressed or anxious for the same reason that they are having problems speaking or controlling parts of their body. The portions of their brains involved in controlling and regulating emotions were damaged by the same insult which caused their more visible symptoms.

However, even though sensory-motor and cognitive-emotional symptoms often derive from the same cause, they are treated by different doctors. Unlike every other organ in your body, modern medicine has decided to divide up the treatment for your brain. Yet, neurologists and psychiatrists are both board certified by The American Board of Psychology and Neurology.

Still, due to the historic division between the fields of neurology and psychiatry, neurologists are typically able to identify signs of depression or anxiety disorders in their patients but are ill-equipped to treat them, while psychiatrists are untrained in reading MRIs and often cannot fully understand the other brain issues their patients are dealing with.

Further complicating treatment, psychiatrists rely heavily on verbal feedback to assess the accuracy of their diagnosis and the effectiveness of the treatment, while patients with multiple sclerosis, Parkinson’s disease, head trauma, or stroke often cause problems with verbal fluency. None of this would be much of a problem if we had also not decided that, due to the social stigma surrounding mental illness and mental health treatment, psychiatric data must be segregated from the rest of the patient’s medical records.

Other medical professionals treating a patient cannot access the part of the patient’s medical history that deals with mental health or substance abuse problems. Also, those doctors cannot communicate with the treating psychiatrist without jumping over many administrative hurdles.  Since both neurologists and psychiatrists commonly prescribe medications which target the same neurotransmitter systems, drug interactions can be problematic and even life-threatening.

Clearly, we need to find a way to do better for patients dealing with brain health issues involving both neurological and neuropsychiatric symptoms.  We propose less division and more collaboration between neurologists and psychiatrists as they research, design, and implement treatment for these patients. It is not funny that people are told that they should or must be happy to be alive after a major injury, stroke, heart attack, or chemotherapy treatment, when in reality, they often feel as though they will never be happy again. Our patients are waiting.

Solutions will not be simple. The problem involves deeply entrenched thinking and firmly established practices. However, a modification to access rules related to “sensitive medical information” could be a start. Rather than the current rigid segregation, this type of information could be made available to other medical professionals on a “need to know” basis.

For instance, neurologists need to know whether their patients are taking an SSRI for depression before prescribing another such medicine for neuropathic pain. It would be valuable for neurologists to be able to directly communicate the physiological symptoms they are seeing related to a patient’s emotional state to the doctor who is actually treating these symptoms. This would be particularly important in circumstances where the patient’s ability to communicate is impaired. Likewise, ICU doctors need access the to full medication history of an unconscious patient to prevent drug interactions or withdrawal symptoms. A dermatologist or gastroenterologist, on the other hand, would be much less likely to need this information.

In the long term, the best solution might be to merge neurology and psychiatry back into a single medical discipline, with subspecialties in neuropsychiatry focusing on different types of conditions but all brain doctors receiving basic education related to all aspects of brain injury and illness. Neuroscience has long understood that the brain and mind are simply two different ways of thinking about the same organ. From a neuroscience research perspective, the main difference between a neurological condition and a psychiatric disorder is simply that we have better animal models of the neurological conditions. Thought disorders in animals are harder to assess than conditions affecting movement or senses. But, these pathologies are not fundamentally different.

Professor Joseph B. Martin, former Dean of Harvard Medical School and a neurologist by training, has summarized the main argument for remarrying neurology and psychiatry as follows, “The separation of the two categories is arbitrary, often influenced by beliefs rather than proven scientific observations. The fact that brain and mind are one makes the separation artificial anyway.”

Professor Martin’s perspective could be useful in moving towards a greater recognition that all mental processes are biological. A common framework for understanding brain conditions could improve current treatments for all brain conditions and encourage integration of research focused on conditions with different outward symptoms, but common biological mechanisms. For example, transcranial magnetic stimulation is currently being explored as a nonpharmaceutical treatment for depression as well as a means for accelerating recovery of motor function and speech in stroke patients. Information about the safety and efficacy of treatments for both conditions could benefit both patient groups. Such a reclassification of mental illnesses as simply a subcategory of brain illness could also potentially reduce the stigma of these conditions both within the medical community and the larger society.

A more integrated approach to brain research could ultimately prepare the world for the new age of brain and mind treatments that will involve genetic approaches, immunotherapies, neuroprotective factors, and even interfaces between brain systems and artificial intelligence. A new realm of scientific awakening beckons. Again, our patients are waiting.

This blog was co-authored by Karen Lankford, PhD, Neuroscientist at Yale University and Dierich M. Kaiser, MD. Board Member of the AMWA, Senior Psychiatrist at Western Tidewater Community Services Board, and Locums Faculty at Virginia Commonwealth University.