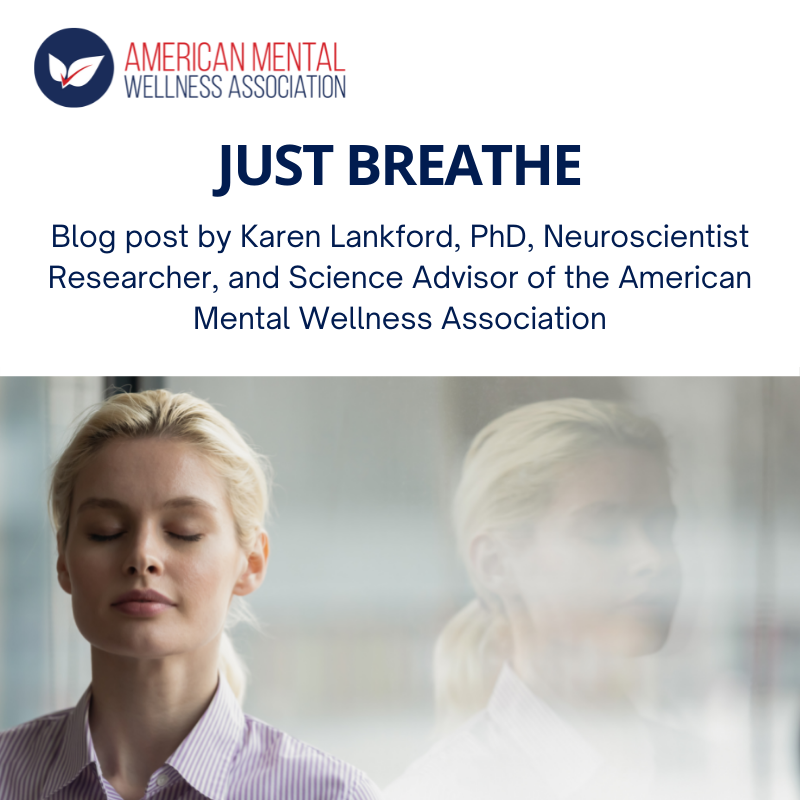 Just breathe. Most of you have heard this advice when you were out of breath with excitement or anxiety and trying unsuccessfully to tell someone what was happening. There is actually some very sound science behind this advice.  When you experience strong feelings of fear, anger, or excitement, you do not just experience it in your head. You feel it in your body. That rapid breathing and heart rate, the tightness in your chest and stomach all feed back into the emotional centers of your brain. These sensations amplify your emotions and make them seem out of control and they are all the result of your sympathetic nervous system dumping adrenalin into your blood stream. Adrenalin is the so-called “fight or flight” hormone which revs up your system and prepares it to respond forcefully to a potential threat. It has a counterpart however. The parasympathetic nervous system works in partnership with the sympathetic nervous system and produces noradrenalin to calm your systems down and return them to a baseline level of routine functioning, maintenance, and repair once the need to action has passed.

For the most part, the actions of your sympathetic and parasympathetic nervous systems are outside your conscious control. But there is one big exception. Your breathing is under the shared control of your conscious and unconscious mind. You cannot just decide to have your body stop producing adrenalin and start producing noradrenalin, but you can decide to slow your breathing. And when you do tell your body to breath more slowly, to take in a deep breath and slowly let it out, your parasympathetic nervous system accomplishes this task the only way it knows how.  It starts releasing noradrenalin and suppresses the release of adrenalin by its sympathetic counterpart. Without the surging adrenalin levels, your physical sensation of anger, fear, or excitement is abated, and the emotional intensity becomes muted. You still experience the same emotions, but they do not seem so out of control.

Slow breathing exercises are one of the simplest things that a person can do to gain a measure of control over anxiety disorders or PTSD-induced rage attacks. Exercising your parasympathetic nervous system by consciously slowing your breathing will literally bulk up the synapses in the same way that lifting weights will bulk up your muscles.  As your parasympathetic nervous system gets stronger, it will more easily be able to push back against the aggressive actions of your sympathetic nervous system.  You will still experience the same emotions, but you will find it easier to control how your respond to them. In other words, it will not “cure” and underlying problem, but it will keep the problem from escalating to a catastrophe.  You will still be nervous about that job interview or angry with your coworkers, but you are not going to have a panic attack in the elevator or punch someone in the face and get fired.

One of the simplest breathing exercise programs which produces some of the fastest results is the 365 plan.  Slow your breathing down 3 times a day to 6 breaths per minute for 5 minutes. This is much harder than it sounds, and on the first couple of tries most people cannot manage to produce more than a few 10-second-long breaths at a time.  It doesn’t matter if you do not do it perfectly, but there are also some other options for slowing down your breathing and exercising your parasympathetic nervous system which might fit in better with your lifestyle.  One of the main reasons that human breathing is not fully under control of our unconscious minds is the fact that we need to alter our breathing patterns in order to speak. Singing, or playing a breathed musical instrument, such as a tuba, clarinet, or harmonica requires even more breath control because all of the sound is produced by exhalation.  Since the exhale portion of the breathing cycle has the greatest effect on your parasympathetic nervous system, singing a song, such as ballad or gospel hymn that has long drawn-out phases, forces you to exhale much more slowly than you normally would.  Blues music has the same effect on horn players. Singing or playing a musical instrument can therefore be a more convenient way to increase noradrenalin production for the musically talented and singing or playing with other people in a choir or band can enhance these effects as your unconscious mind also tries to synchronize your heart rate and breathing with those around you.

Breathing exercises might seem too “New Age” for a lot of people to take seriously and the yoga pants and cross-legged pose fashionable among the proponents of meditation and mindfulness might make the whole thing seem silly. However, these accoutrements and postures are not necessary for achieving the purpose of strengthening the parasympathetic nervous system and increasing the amount of noradrenalin in your body. How you do the exercising is up to you. The important thing to remember is you have to put in some reps. You cannot expect to do the exercises for a day or two and have everything be fine anymore than you could expect to go to the gym for a couple of days and have the body you want.