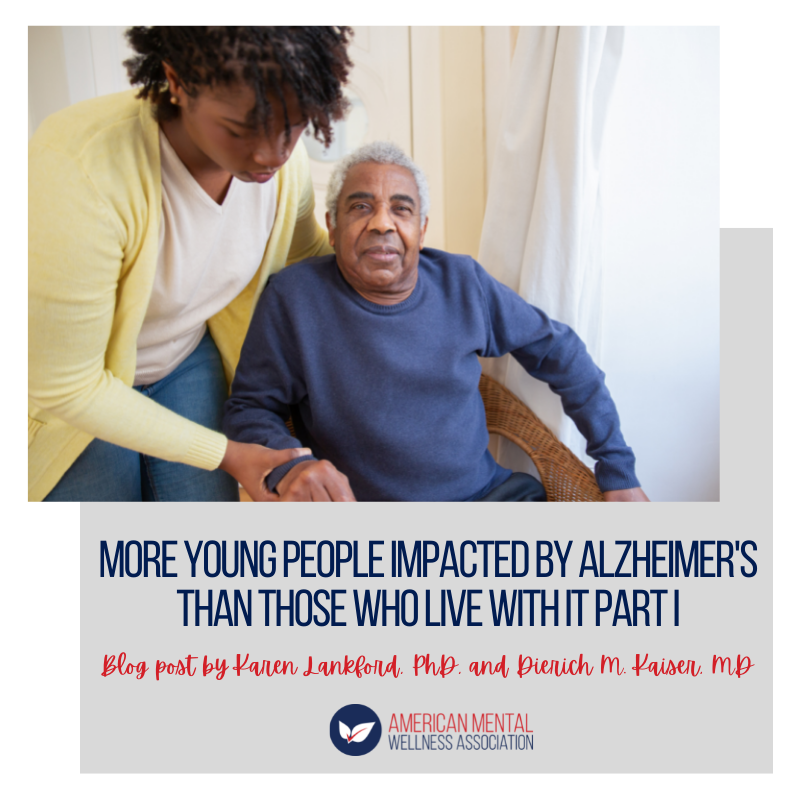 More Young People Impacted by Alzheimer’s Than Those Who Live With It Part I | Karen Lankford, PhD, and Dierich M. Kaiser, MD

In the movie version, Dominick’s mother would be having amusing episodes of forgetfulness.  She would reveal secrets from her past as she talked about childhood events as though they happened yesterday.  There would be touching moments between mother and son as she failed to recognize this kind stranger.  A tiny tear would roll down the son’s eyes as he gained a deeper understanding of the woman who raised him.
In the real-world, Dominick’s mother periodically became convinced that her son had kidnapped her.  She would fight with him, try to bite or scratch him in order to escape the house and run out into the street in her night gown screaming for help.  In the real world, she often peed herself at the dinner table.  She became angry for no discernable reason, swore, and used racial epithets.  In lucid moments she would express her dread of going into a nursing home and would try and make her son promise to never do that to her.  On bad days, it would be clear that keeping such a promise would be impossible.  Relationships with other family members became strained.  No one wanted to visit, but everyone had opinions about what he should do.  In the real world, there was an overwhelming feeling of guilt and shame.  Every day, part of him wished that his mother would just die, part of him thought of her as already dead, and another part hoped for just a few more minutes with the woman she had once been.  Oh God how he wished she had movie Alzheimer’s Disease.

Alzheimer’s disease does so much more than take memories away from the sufferer.  It changes their personality and eventually their lives, but the process takes years.  During that time, their loved one’s experience a complicated grief that can rip apart every other relationship in their lives. Most people have heard about the effects of Alzheimer’s Disease on the hippocampus, a key part of the brain involved in storing and retrieving information. This explains the memory loss in people with Alzheimer’s Disease which follows a distinctive pattern of more recent memories being lost before older memories. This is quite unlike normal age-related memory loss in which the brain seems to prioritize holding onto the most important information, regardless of the time it was stored, but forgets much of the day-to-day trivia, regardless of when it occurred. A healthy aging brain will forget the name of a childhood friend whom they have lost track of but remember the names of their grandchildren. The brains of Alzheimer’s patients do the reverse.

The brain damage in Alzheimer’s Disease however extends well beyond the hippocampus. For those who know what they are looking at, histological sections of Alzheimer’s brains are like the sites of a mass shooting. There is not just one victim. The carnage is everywhere. The real horror however is that the parts of the brain which seem most vulnerable to the disease are the ones that make us most human and most ourselves. The parts of the brain involved in basic vision, hearing and muscle control are relatively unaffected, at least until the later stages of the disease. However, the parts of the brain involved in reasoning processes, in analyzing and interpreting what one sees and hears, putting it into the proper context, and particular into the proper social context often do become impaired early, as do the parts of the brain which allow us to exercise self-control and specifically not do things which violate social taboos or our own values.

Memory loss combined with a poor ability to interpret signals in their current environment can cause the person to become paranoid and develop delusions about what is going on around them. The disruption in self-control pathways can result in something akin to Tourette’s Syndrome, where the individual feels a strong compulsion to do exactly the thing which they would most want to avoid even approaching doing. Well respected pillars of their community, they suddenly start spewing profanity in church or exposing themselves to school children. And all of this is completely unpredictable. The effects vary for each patient and for the same patient from day to day, or even from hour to hour. The brain keeps trying to find work arounds for the malfunctions, but the disease is progressive. The patch might hold for a few weeks or only a few hours.

In their more lucid and clear-headed moments, they will not even remember what they did to cause their loved ones to pull away from them or the police to arrest them.

People who have not witnessed the horrifically inappropriate behavior themselves, will not believe caretakers who say that the sweet old man or old lady needs to be confined to a nursing home. Sleep patterns for patients with Alzheimer’s Disease are also disrupted, requiring constant 24 hour a day vigilance from care givers, who get about as much sleep as parents of newborns. Those whose parents exhibited much more gentle mental declines will call children of Alzheimer’s Disease patients with behavioral problems heartless for not caring for declining parents in their own homes.

Although there are some promising therapies on the horizon which offer hope for preventing Alzheimer’s Disease or dramatically slowing its progression, realistically, the number of people living with Alzheimer’s Disease is going to dramatically increase over the next decade or so as the Baby Boomer generation ages into the high-risk category. This means many more families will be coping with the stresses of care giving and making difficult decisions about nursing homes or other care options.

There are treatments which can help control some of the symptoms of Alzheimer’s Disease, such as poor sleep and anxiety, but we need to address the problem more broadly as a society. Patients do better in familiar environments, especially early in the disease and familiar sights and sounds can help them orient themselves in the present. But home care is not practical for all families, even with the assistance of home health aides. Family members may live in different cities, not have enough space for an aging parent to move in with them, work multiple jobs to make ends meet, or live in a situation which would be unsafe for someone with dementia.

We need to recognize that Alzheimer’s Disease, like mental illnesses affecting younger people, is a societal problem and not just a family problem.

This blog was co-authored by Karen Lankford, PhD, Neuroscientist at Yale University and Science Advisor of the American Mental Wellness Association and Dierich M. Kaiser, MD, Board Member of the AMWA, Senior Psychiatrist at Western Tidewater Community Services Board, and Locums Faculty at Virginia Commonwealth University.