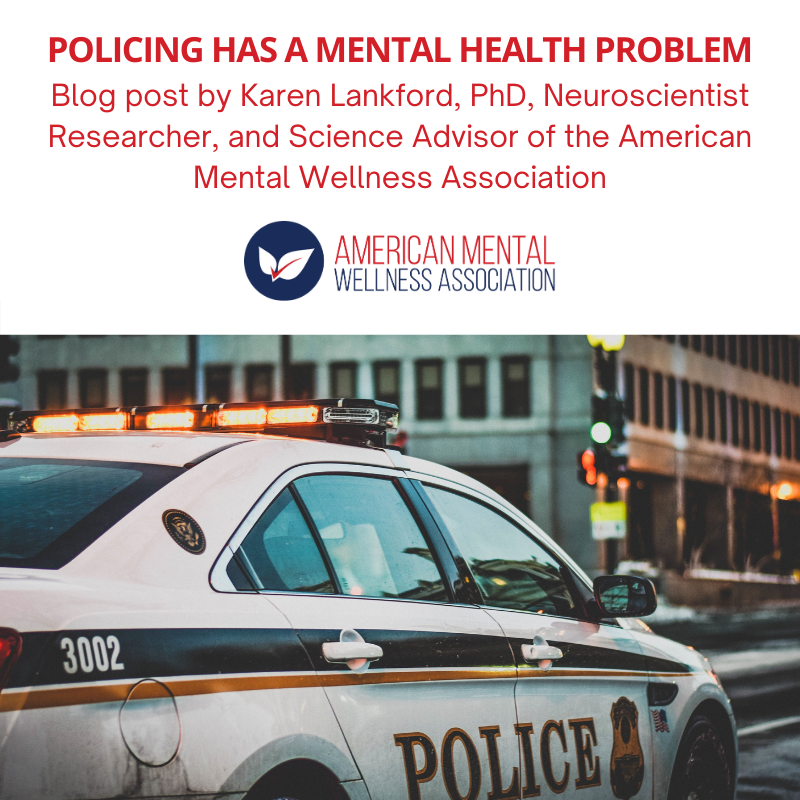 Put aside for the moment the question of whether there is systemic racism in policing throughout America.  What is definitely happening right now in police departments across this country is they are suffering from an epidemic of mental health problems.  Rates of domestic violence, alcohol abuse, and divorce are much higher for police officers than the general population and suicide rates are higher for police officers than for almost any other profession.  In fact, police officers are more than twice as likely to die by their own hands as they are to be killed in the line of duty.  Note that one Capital Hill police officer died in the attack on the Capitol on January 6th, but two others took their own lives in the following few days.  This is not at all an unusual situation. The death of one officer is often followed by a spike in suicides among other officers in the same department.

The mental health crisis in policing cannot be addressed without looking at the culture of policing. Fundamentally, police training gets the threat profile to the officers wrong.  The greatest threat to a police officer’s life and safety is not the armed and violent offender which he/she might encounter in the course of their duties.  It is the person who looks back at them from the mirror when they brush their teeth.  Policing is not actually one of the most dangerous jobs in America.  It is not even in the top ten.  Deep sea fisherman, loggers, and even cab drivers, are far more likely to die or be seriously injured on the job than police officers.

As we have already mentioned, police officers are more than twice as likely to commit suicide as to die in the line of duty.  Furthermore, half of officer deaths occurring in the line of duty result from car accidents when officers were not wearing seatbelts, and hence failure to take routine safety precautions was a major contributor to their deaths.  Similarly, after action reports often find that deaths or injuries of police officers can be linked to simple errors by the officers themselves.  A lack of situational awareness or failure to maintain proper distancing are often cited as the reasons why suspects were able to bring a weapon to bear before officers were able to react.   Remaining calm and alert and following standard protocols might have saved the officers’ lives.

The mindset of the officer therefore is incredibly important to their safety, not their weapons skills or any proactive “stop and frisk” policies.   Stress is the big killer of police officers.  Poorly managed stress increases the risk of substance abuse and suicide and promotes on the job tunnel vision that can lead to fatal errors in encounters with violent individuals.

Policing may not be one of the most dangerous jobs in the country, but it is one of the most stressful.  Unlike other professions, the dangers faced by police officers on the job are sporadic and unpredictable.  Most encounters with the public are uneventful, but there are just enough armed and violent people out there that officers can never let their guards down.  One day you might be called to rescue ducklings form a culvert, the next it might be an active shooter at a grocery store.  This uncertainty causes officers to experience a constant low level of arousal and stress throughout their duty shifts.  Officers also witness a great deal of human suffering and their duties regularly expose them to the worst examples of man’s inhumanity to man.  They spend far too much of their time interacting with victims and perpetrators of murders, assaults, rapes, child abuse or neglect.  This takes an emotional toll on any feeling human being.  Stress hormone levels spike when officers respond to a crime in progress or check out a potentially armed suspect, or when they interview witnesses who recount violent events.  It would be surprising if most police officers were not suffering from some level of PTSD.

Although the nature of police work exposes officers to high levels of stress, there seems to be extraordinarily little effort on the part of most police departments to deal with this problem.  Stress management is not an integral part of police offer training and officers seeking therapy are treated with suspicion by fellow officers and supervisors. What is wrong with him?  Can we trust him to watch our backs?  Police officers learn not to talk about their feelings and not admit when the job is starting to get to them.

Post traumatic stress disorder (PTSD) is not, as it is typically portrayed in the movies, all about flash backs. Flash backs sometimes do occur in people with PTSD, but they are relatively rare.  Rather than flash backs, PTSD is characterized by emotional volatility, with bouts of extreme anger and despair.  The toxic effects of chronically elevated stress hormones tend to damage the parts of the brain that calibrate emotional responses.  For people with PTSD, levels of fear, anger, or sadness no longer bear much relationship to the severity of the situation triggering these emotions. PTSD sufferers therefore tend to overreact to situations, both on the job and in their personal lives.  One can only speculate how many times police officers have used deadly force because they were “in fear for their lives” when their sense of fear was wildly exaggerated by PTSD-induced emotional instability.  Excessive use of force by police officers and police officer suicides are not two separate problems. In many cases they are the same problem pointed in two different directions.  The violence can be directed outward or inward, but both are rooted in the same emotional instability.

High levels of physiological stress are also linked to other types of errors by police officers.  In training exercises designed to mimic real world scenarios where officers encounter ambiguous threat situations, trainees who exhibited elevated heart rates and other physiological signs of stress at the onset of the simulation were more likely to commit errors that resulted in the simulated deaths of officers or innocent civilians and/or escape of the designated criminals.  This finding was completely unsurprising to physiologists, as it is well known that spiking stress hormone levels tend to induce tunnel vision and impair clear thinking.  Muddled thinking and tunnel vision are exactly what you do not want officers to be experiencing in critical life and death situations.

Current policies in many police departments mandate counseling for officers after they are involved in a shooting incident on the job.  One wonders how many of those shootings would never have happened if the officers had received counseling before the shooting to help them learn how to regulate their emotions and maintain better situational awareness.

If the public wants both better policing and fewer police officer deaths both on and off duty, we need to develop better policies to address the mental health crisis in policing.

As the high suicide rates among police officers make abundantly clear, the current culture of policing is not conducive to good mental health.  It should be equally obvious that poor mental health is not something that is desirable in a police officer.

Mental health problems are physical medical conditions with cognitive and emotional symptoms.  Therefore, mental and emotional fitness must be included in physical fitness for duty; and, departmental policies should encourage officers to seek early treatment for any condition which might impair their fitness for duty.  Unfortunately, seeking treatment for symptoms such as anxiety, depression or PTSD is often seen as a sign of weakness and a reason for removing officers from active duty or blocking promotion, rather than a proactive and responsible measure to maintain one’s fitness for duty.  This needs to change.  I would in fact argue that periodic counseling sessions should be mandatory for officers, in the same way that periodic physicals and firing range quantifications are job requirements, and for the same reason.  If an officer is developing high blood pressure, you want to treat that before he has a heart attack.  If in a situation where he needs to use his weapon, you want to make sure he is in practice for the task and is not going to miss and hit bystanders.  If an officer is beginning to develop depression or PTSD, you want to treat that before he eats his gun.  If an officer faces a highly stressful encounter with a potentially armed suspect, you want to have him in practice for calming his emotions and thinking clearly in the situation.  It is always better to prevent an illness, or treat it at its earliest stage, than to try and treat it when it is well advanced.  This is as true of mental illnesses as it is for cancer or heart disease.

Below is a link for immediate access to an early intervention screening tool to assist any individual: https://secureservercdn.net/198.71.189.253/44b.3e9.myftpupload.com/wp-content/uploads/2018/12/AMWA-Early-Intervention-screening-tool.pdf