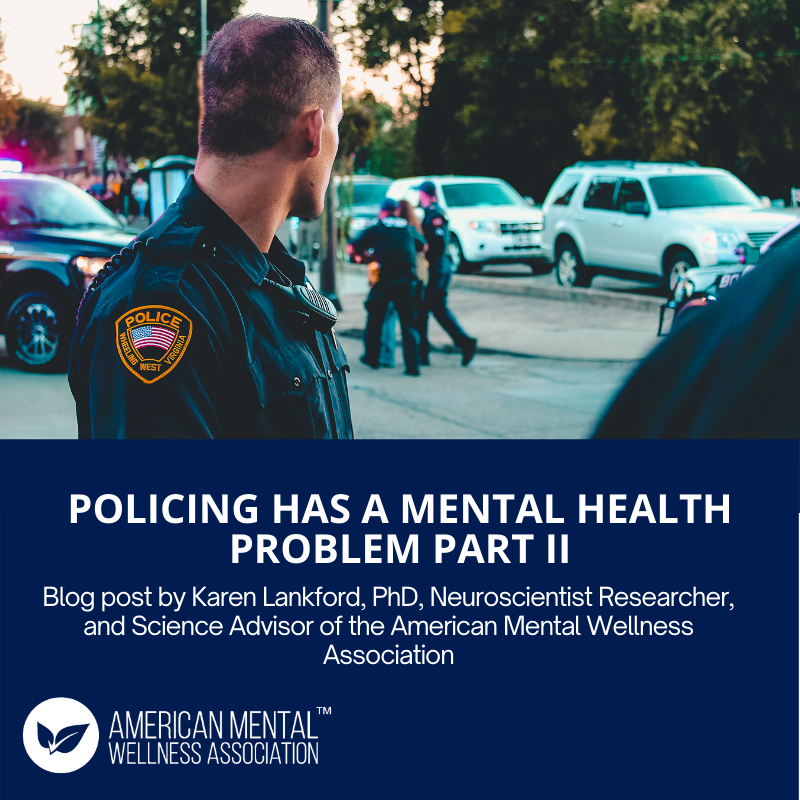 I recently wrote a piece about why I believed that police officers should receive ongoing mental health counselling to help them manage the stress they unavoidably experience on the job. I argued that poor stress management can lead to too many mistakes in the field, but I would like to give one example to illustrate this point.

When I was still living in the Chicago area with my parents, there was a horrible incident in the news where a white officer shot a 5-year-old black boy in the head. The situation occurred something like this: A police officer had responded to a report from a concerned neighbor who had not seen her neighbor go in or out of the apartment for a couple of days.  The neighbor had not gotten a response when she knocked on her neighbor’s door, but she had been hearing noises intermittently from the apartment.  The neighbor became concerned that something was wrong.  When the officer entered the apartment to investigate, the apartment had been dark. The lights were off, and all the blinds had been drawn. Searching from room to room, as he entered one of the back rooms, he had heard a gunshot almost at the same time that he had detected the glint of a gun barrel from a chair that was roughly facing the door he had just entered through. The officer then fired at what would have been chest level for a seated adult, and in the muzzle flash of his weapon, watched his bullet enter the head of a small child watching a western show and playing with a toy pistol.

This was not the act of a bad cop, a racist cop, or a cop with a reckless indifference to human life. You can easily see how the situation had unfolded. The officer was probably nervous, uncertain what kind of situation he might be facing. His heart would have been racing.  He probably had his gun held out in front of him, clearing each room as he went, because having the gun in his hand made him feel safer and that is what officers do on TV.  When he believed that he was under fire, he returned fire instantly and without hesitation, as he had been trained. Nobody, not even the child’s own mother believed that this had been anything other than a tragic mistake. (The mother, by the way, had been at an out of town job interview and had been unable to afford a sitter. She had reluctantly left her son with a supply of cereal, milk, bananas, and peanut butter and jelly sandwiches and instructed him not to open the door or windows until she got back. Hence the lack of response to her neighbor’s knocking.) If anyone had been inclined to doubt the officer’s sincere remorse, that was immediately dispelled by the news footage of the man’s fellow officers having to literally carry him out of the building, tears running down his face, snot pouring out of his nose, wailing and sobbing like a damned soul being dragged to the fiery pits of hell.

And yet, as much as we can all sympathize with the officer, as much as we understand that this was just a tragic mistake and it was not really his fault, it also absolutely did not have to happen. Let me make it clear. I am not blaming the officer or saying that he was at fault. However, if the officer had exhibited better situational awareness, had he been calmer and investigated the situation with more curiosity and less fear, there were many signs that he could have picked up on about the true nature of the situation. If he had calmed his beating heart and listened to the sounds of the apartment, he would have recognized that a TV was on in a back room, and he probably would have even recognized the show as a western from the stereotypical music.  His ears therefore would have been more attuned to the difference between a movie sound effect and the noise of an actual modern gun being fired. He would not have been so easily fooled into mistaking a gunshot on the TV screen for a shot fired at himself. If the officer had looked around on the floor, he would have seen the action figures and coloring books and half eaten sandwiches strewn about the room and recognized the common detritus of a small child left unsupervised for more than fifteen minutes. Knowing that there was likely to be a small child on the premises, the officer would have wanted to avoid using his weapon until he knew where the child was and could be sure that he or she would not be in his line of fire.  The officer might even have holstered his weapon and called out announcing his presence to avoid frightening the child. If the officer had taken more time to let his eyes adapt to the low level of lighting, he probably would have seen that the shape in the chair was too small to be an adult. If the officer had not had his gun in his hand and reacted immediately, if he taken even a few seconds to think before firing, he would have noted the absence of a muzzle flash preceding the sound of the gunshot and the lack of impact sounds from the bullet. He might even have noticed the unusually small size of the “gun” and the fact that the barrel had not been pointed at him.

There had been plenty of information available to the officer which would have let him know that he was not in danger and should not have fired, but he had not taken in the information. And the reason why the officer had not taken in such critical pieces of information is obvious. Elevated stress hormones give people tunnel vision. Anxiety makes people focus exclusively on the perceived source of the threat. It does not allow people to think clearly and properly evaluate the broader situation. Policing is a stressful job, one in which the officer often faces uncertain and potentially threating situations. It is also one in which situational awareness is critical for the safety of both officers and civilians. It is a profession where stress-induced tunnel vison can lead to deadly consequences.

When I think about this story, I do not think as much about the child who tragically lost his life, or even the mother facing and unbearable loss and the guilt of leaving her son alone that one time in the hope of being able to make a better life for both of them. I think about the officer who fired that fatal shot. I wonder how many times he replayed that day in his own mind, cataloging all of the little details that he had missed which would have cause him to hold his fire. I wonder how many times he dreamed that it had all ended differently, that he had ducked behind the door and shouted a warning first and the two of them had laughed and become great friends afterwards, only to wake up to the reality that it had not been so. No one was the least surprised when just a few days after the shooting, the officer had retired on as psychological disability. It was pretty clear, that after something like that, he would never be able to fire a gun again. I wonder if he had managed to avoid becoming another suicide statistic because he had suicide risk written all over himself.