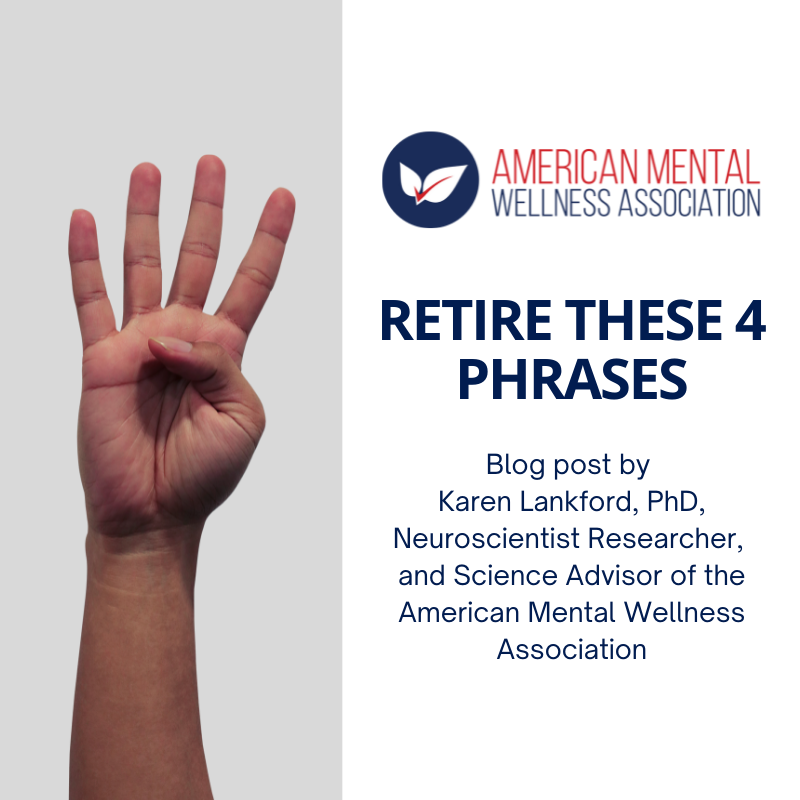 Words matter. The language that we use to describe people and event color and shape our perceptions of them. A child who is a victim or suspect in a criminal case automatically receives more sympathy and presumption of innocence than a teen, although both terms accurately apply to a 14 year old.

Similarly, a person who is reported to have committed vehicular homicide is deemed more culpable than one
described as being responsible for a fatal car accident. The name of this organization itself “The Mental
Wellness Association” influences how its mission is perceived. Aiming at wellness is clearly a more ambitious goal than simply an absence of disease. With the role of words in shaping perceptions in mind, I propose that there are at least 4 common phrases that deserve to be retired.

The term “behavioral health” was coined in a well-meaning, but I believe misguided, attempt to evade the stigma associated with mental illness.

The rebranding did nothing to alter the underlying societal biases, which merely transferred to new name, and it created a new set of undesirable mental associations. The term “behavioral health” implies that the problems with depression, schizophrenia, ADHD, or addiction are the overt behaviors their sufferers exhibit. The symptoms which cause distress for others are conflated with the disease itself. By this reversal of cause and effect, getting rid
of the undesirable behavior is presumed to solve the problem of mental illnesses.

One would never think such a way about other diseases. We do not have departments of EEG health. Everyone understands that EEG recordings are just a measure used to help identify underlying cardiovascular problems and that digitally altering a recording to remove the overt evidence of disease would not make a cardiac arrhythmia go away. Likewise, ICU nurses would never imagine that simply turning off a pulse oximeter when it shrieks one of those pesky warnings would actually accomplish anything that benefited the patient. This however was the woefully misguided rationale behind lobotomizing acutely psychotic patients. Since the erratic and sometimes violent behavior of individuals experiencing paranoid delusions was deemed to be “the problem”, it was “cured” by cutting out a part of the patient’s brains that generated their motivation to do much of anything. Lobotomized patients became placid and compliant and “the problem” (for the hospital staff) was solved.

The kinds of abnormal behaviors that can be observed by outsiders are just visible indicators of malfunctions occurring inside the affected individuals’ brains. Conflating the symptom with the disease runs the risk of simply masking the symptoms that others can see, and, in effect, painting over the watermarks on the ceiling, rather than fixing the leaky roof.

Furthermore, since most human behavior is at least partially under the person’s conscious control, the implication of the term “behavioral health” is that patients should be able to simply stop such behavior and could do so if they really wanted to. The ongoing illness becomes the sufferer’s fault, and this is especially true when the condition is something like depression or addiction. Seeking medication to mitigate feelings of hopelessness or drug cravings are considered signs of weakness or moral failure, rather than rational responses to medical problems.

I personally prefer the term physical mental health condition or neuropsychiatric disorder rather than mental illness or behavioral disorder to describe the kinds of brain-based conditions which manifest themselves primarily as cognitive and/or emotional symptoms. The term physical mental health condition reminds people that “the mind” is simply a manifestation of brain activity and that, like any other organ in the body, the brain can malfunction as a result of inborn genetic errors or environmental stressors. When we say that something is all in someone’s head, that is only because that is where the brain is located.

The term neuropsychiatric disorders, like the term neuropathic pain, identifies the locus of the problem and suggests a set of treatment strategies. Neuropathic pain, which is caused by nerve damage, rather than damage to other tissues, is unresponsive to over the counter pain medications and opioids and cannot be relieved be surgery. Treatment for neuropathic pain therefore involves the use of drugs
which target ion receptors or neurotransmitter systems and/or biofeedback approaches to diminish the
conscious perception of pain. Likewise, neuropsychiatric disorders are treated using drugs that target
neurotransmitter systems and/or cognitive strategies to try and override or bypass malfunctioning
neuronal circuitry. The name (neuropsychiatric disorder) tells you where to start looking for cause and
treatment.

2: That which does not kill us makes us stronger.

This statement is often paired with other statements such as: “You’re strong. You’ll get through this,” which the speaker seems to imagine is somehow being supportive. In reality, the damaging effects of emotional stress and emotional pain are both destructive and cumulative.

They are more like the effects of metal fatigue on the parts of an airplane than tempering of a swordsman’s steel blade by repeated firing and hammering. The damage caused by childhood physical abuse or sexual molestation does not make for stronger adults.

Such early suffering only produces adults who are more vulnerable to developing conditions such as PTSD, anxiety or depression if they are subjected to additional highly stressful experiences. Extolling another person’s supposed strength only makes them feel like more of a failure if they are not strong enough to handle a problem and must turn to others for help. It equates strength with virtue and implies that the weak are worthy only of death.

Telling people that suffering will make them stronger is often also a convenient excuse to do nothing to try and alleviate the suffering of others or grant the sufferers any special considerations. If surviving poverty, childhood neglect, serious illness, or racial discrimination was something that actually benefited the person, there is no
reason to give them any greater credit for their successes or ease their path forward in the future. If anything, one should be more forgiving and accommodating to those who have had easy lives, because they are unused to adversity and cannot be expected to handle it well. A much more helpful response for a person going through tough times would be to remind them that they have gotten through difficult problems in the past and that this situation will not last forever.

A more thoughtful response to someone who has had to overcome additional obstacles to reach their position in life is to judge their accomplishments the way that you would judge a runner who just completed a marathon with weights tied to his ankles. Imagine what they might have accomplished already if they had not been weighed
down by additional burdens and what they might manage in the future if the shackles are taken off.

Children in our society learn from an early age that expression of emotions such as sorrow or fear are, at best undesirable, and at worst, not to be tolerated. Many of us have experienced a slap in the face accompanied by the words “I’ll give you something to cry about”, because a parent could not handle the outsized emotional reactions of a child. Both boys and girls learn that they are expected to suppress their emotions and present a false cheerfulness and positivity to the world, but the messaging is even more relentlessly toxic for males.

Men are not considered manly and not respected if they express “weak” emotions such as sorrow, grief, or anxiety. Men are supposed to constantly present an image of strength. They learn to deny “unmanly” feelings even to themselves and transform these emotions into “strong” and “masculine” anger. Faced with loss of a job or fear of losing their wives and children, men often lash out with anger and violence that drive away the people they fear losing. Others numb their emotional pain or cope with fears by abusing drugs or alcohol. This toxic ideal of manhood requires men to deny much of their humanity and metaphorically stick a knife in their brains and cut out half of their emotions.

Instead of calling on men to “man up,” maybe we could start just urging them to be the best people that they know how to be and that recognizing and expressing their emotions verbally – “I am sad, anxious, angry, afraid, worried, etc.” is a sign of maturity, not weakness.

4: Family is so important.

Now, I am not trying to say that family is not important. It is the “so” part of the formula that I have a problem with. It implies that the needs and/or wishes of one’s family are deserving of a level of priority in your life that overrides every other consideration. If you have a family with a healthy interpersonal dynamic, where the members are supportive of one another and help each other out to the best of their abilities and resources, then your family ought to be one of the most, if not the most, important things in your life. But not all families are like that.

Many families are unhealthy and destructive to the wellbeing of some, or all, of its members. In these kinds of cases, appeals to family loyalty are too often demands that some individuals sacrifice their mental and/or physical wellbeing on the altar of the family’s supposed image or reputation, or simply to the prejudices of some of its members.

So, if your family is insisting that reporting child molestation or divorcing a physically or emotionally abusive spouse would “destroy the family”, then maybe it is the kind of family that ought to be destroyed. If your family is pressuring you to undergo gay conversion therapy because they just are not going to have “one of those kinds” in their family, maybe you should start looking for a new family. If your family requires you attend family events where alcohol is liberally served and consumed, when they know that you are a recovering alcoholic, or if they belittle you and put you down, making you feel worthless, then they are not the kind of support structure that a family should be. If they are more concerned about the neighbors knowing about you going into a psychiatric hospital or a drug rehab center than you getting the treatment you need, you need to start being less concerned about them.

In short, your family should be exactly as important as it deserves to be. That might be a lot, or it might be not important at all.