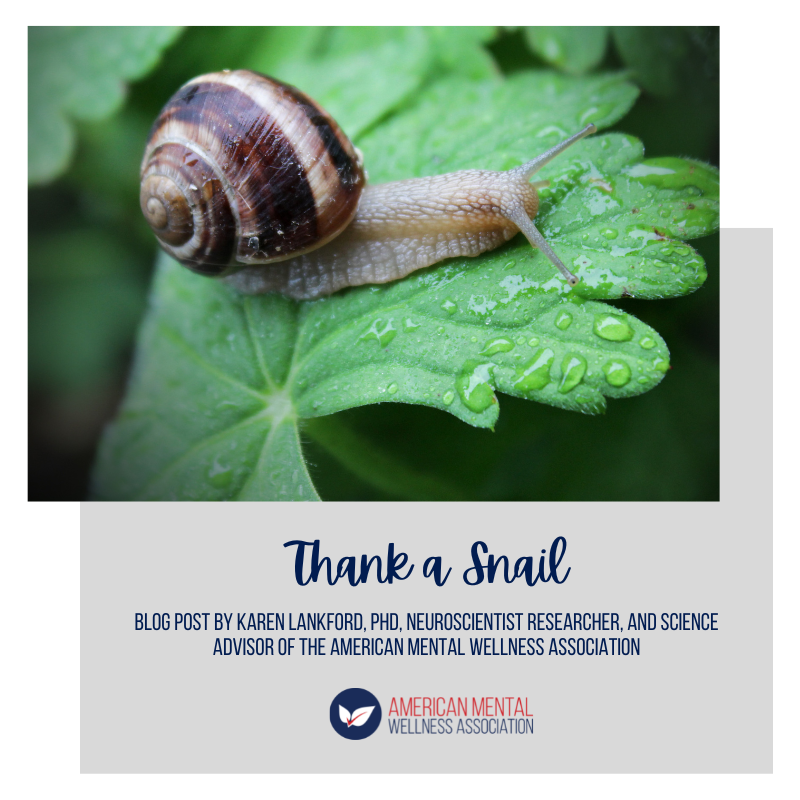 The great thing about snails is that they have really large neurons. Well, large from an electrophysiologist’s standpoint.

Some of them are as large as the head of a pin which is huge if you want to record electrical activity from single cells. They also have synapses which are correspondingly large. With small groups (ganglia) of really large neurons controlling readily observable responses (like the gill withdrawal reflex), scientists could work out how neurotransmitter receptor systems worked and how networks of neurons worked together to control functions and could change with use to alter future actions (cellular level learning).

It turns out cells which communicate using the neurotransmitter serotonin play a key role in controlling the gill withdrawal reflex in snails and by puffing different test chemicals on those big synapses, they found that drugs which blocked the reuptake of serotonin at the synapse after it was released, increased the responses of the neuron on the receiving end of the message.

Furthermore, with repeated drug applications, the synapses actually got bigger and the effects of any signal from the serotonin producing cell became stronger. It just so happens that serotonin also plays a key role in the human brain in delivering signals about positive emotions and general bodily wellbeing to the emotional centers of the brain. Any condition which weakens that serotonin input to the emotional center of the brain, can cause the person to feel emotionally numb most of the time and allow negative emotions such as sadness or anger to easily overwhelm them.

Drugs called serotonin selective reuptake inhibitors (SSRIs) are not “happy pills”, but they boost positive emotional signals that would otherwise be too week to have an effect. The really great thing about SSRIs though, is that by strengthening the synaptic connections they target, they become more effective over time. Often, SSRIs work themselves out of a job, helping make the connections strong enough that the drug is no longer needed for the system to work effectively. Unlike many other medications which require patients to take more and more of the drug over time to have the same effect, patients who do not have forms of depression which progress with age, can often decrease their SSRI dosages after a year or two or even taper off and discontinue use entirely.

So, if you, or someone you care about, has been successfully treated for depression, or any one of about a dozen other neurological conditions caused by disrupted serotonin signaling, you might want to thank a snail.

Studying neural networks in snails allowed scientists to learn how to intervene to treat a broad range of neurological dysfunctions. Drugs that targeted specific neurotransmitter systems, transcranial magnetic stimulation, and more targeted cognitive behavioral therapies to effectively exercise weak synaptic connections and bulk them up, could all be applied to improve functioning in parts of the brain which were just not working correctly.

A lot of people seem to feel that taking medication for something like depression, or even seeing a therapist is somehow cheating, that they should be able to handle emotional problems on their own. To me, it does not make sense not to use every weapon in your arsenal to combat a disease that is trying to kill you. Why would you bring a sharp pointy stick to a gunfight? If you have a tool to combat a disease, why not use it?

People with Parkinson’s disease almost never hesitate to take L-dopa when they start having problems with controlling their movements or balance, but the principle is the same. In Parkinson’s Disease, the death of some of the dopamine producing neurons in the cerebellum makes the timing synchronization signal they produce too week to enable the cerebellum to do its job of coordinating contraction and relaxation of different muscles and evaluating position relative to gravity. Taking L-dopa boosts the dopamine signal from the surviving cells and allows the system to operate normally, at least until the disease progresses so far that there are just not enough neurons left to do the job.

In most forms of clinical depression, it appears the key problem is signals from serotonin neurons in the limbic system are too week to allow it to do its job of producing appropriate emotional responses and reinforcing memory. SSRIs boost the serotonin signal enough to restore normal range of emotions and improve memory and concentration. Medications are effective in all cases of neurological or neuropsychiatric dysfunction and are not always necessary. Medications are just one tool that neurologists and psychiatrists can use to help restore normal brain functioning.