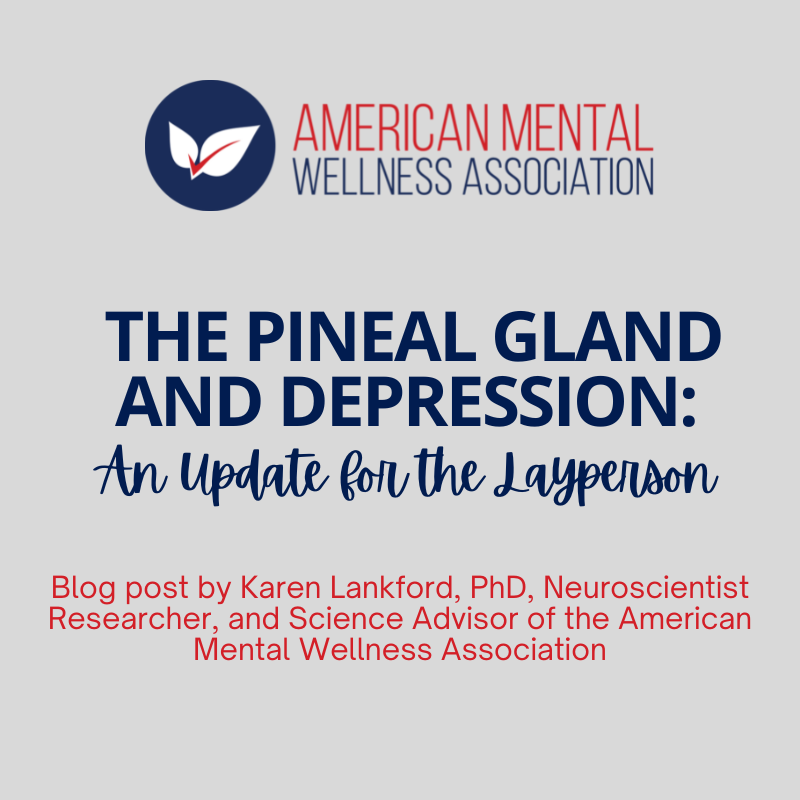 The Pineal Gland and Depression: An Update for the Layperson | Karen Lankford, PhD, Neuroscientist at Yale University

A handful or recent studies have implicated damage to the pineal gland and/or a reduction in melatonin
production with certain types of clinical depression and other mental health diagnoses.

In detailed studies of brain MRI scans, patients with certain types of clinical depression, bipolar disorder, or schizophrenia were more likely to have cysts in their pineal glands or smaller pineal glands than people who did not have symptoms of identifiable mental illnesses or who exhibited other subtypes of clinical depression. Also, mice exhibiting depression like behaviors after exposure to chronic stress showed improvements in behaviorally observed symptoms after receiving injections of melatonin, which is produced by the pineal gland.

Several clinical trials have attempted to evaluate the potential benefits of melatonin treated in patients with bipolar disorder, but the results have been ambiguous. Some studies showed an apparent benefit, but others did not, and the numbers of subject in the studies were relatively small. It appears that there may be a therapeutic benefit of melatonin for some patients with bipolar disorder, but the effects were not robust. The benefits of melatonin treatment were only seen for some symptoms, and not all patients have the same symptomology, so the outcomes have been difficult to evaluate.

What is going on here? The short answer is we are not exactly sure. The pineal gland is one of many
parts of the brain whose function we do not understand well. It is basically a modified light organ and
has sometimes been referred to as a third eye. Cells in the pineal gland fire action potentials, similar to
the firing or retinal neurons, if light is shined inside of the skull.

Obviously, this does not happen in ordinary life. Your skull blocks any light from reaching the pineal gland in any context that does not involve brain surgery, so this light sensing ability serves no purpose. However, the pineal also receives input from the retina about light levels and responds to information about light/dark cycles by producing a chemical called melatonin during the dark part of the cycle.

Melatonin acts as a neuromodulator. It changes the way that some neurons respond to neurotransmitter signals from other cells. Somehow this modulation changes brain activity in a way that tends to promote the kinds of brain activity patterns associated with sleep.

Melatonin does not put people to sleep, but it seems to make the transition from wakefulness to sleep more likely. Some people therefore take melatonin supplements in the hope of shifting sleeping patterns to help them more quickly get over jet lag, but there is not a lot of evidence that melatonin actually works for this.

The pineal gland also produces steroid hormones, including the sex hormones testosterone and estrogen. The amounts of steroids produced by the pineal gland is rather small compared to the amounts produced by testis and ovaries, but the brain location of these hormones may have some effect on influencing internal sense of gender identity or sexual attraction. Or not. The production of steroid hormones might be another evolutionary left over that serves no real purpose.

Right now, we really have more questions than answers about a potential role of the pineal gland in
depression or other neuropsychiatric disorders. One of the key problems with the brain scan studies is
that individual human brain structures are highly idiosyncratic and doing these kinds of detailed brain
scans is very expensive and very time consuming for volunteers.

As a result, investigators typically only have scans from a few dozen individuals with and without the condition they are interested in comparing one another; and, that just is not large enough to be sure that any trend they are seeing is real, and not just a matter of chance.

There is also the chicken and the egg problem. Assuming that pineal glands are generally smaller in people with certain neuropsychiatric disorders, is the reduced pineal gland a cause of the condition, or is it caused by the condition, or the drugs used to treat it? Alternatively, is the change in pineal gland size an unrelated outcome of a genetic mutation which affects development of more than one area of the brain?

Another problem relates to the diagnostic labels of the conditions themselves. Like many other medical conditions, psychiatric diagnoses refer to the part of the body affected and the main symptoms, rather than the cause of injury or symptoms. For example, pneumonia refers to any condition causing inflammation and fluid build up in the deep part of the lungs where oxygen exchange occurs. Pneumonia may be caused by a bacterial infection such a pneumococcus, a viral infection such as influenza or COVID-19, or certain fungal infections. All causes of pneumonia result in low oxygen levels and general pain and difficulty breathing. The basic standard of care for all types of pneumonia involves supplemental oxygen and pain relievers, but some of these conditions will respond best with antibiotics, others to specific antiviral or antifungal agents, and some will have no specific treatment.

Similarly, there are many known causes of clinical depression, some of which have simple treatments,
such as B vitamin supplements or thyroxin, while others only respond to antidepressants, transcranial
magnetic stimulation, or cognitive behavioral therapy. Since it is not always clear what the cause of any
specific neuropsychiatric disorder is, it is not clear whether a potential treatment will benefit all patients
in this class, or only a subset. This means that you may need to test the effectiveness of melatonin
versus a placebo on hundreds of people with the same diagnosis to determine whether it is more
beneficial than chance.

At present, I would say the best guess is melatonin will likely be a useful adjunct therapy that can help
some patients with depression, bipolar disorder, etc. who have less severe symptoms and/or experience
fewer exacerbations, or episodes of suddenly worsening symptoms. Since melatonin has very few side
effects, it is likely many doctors will be interested in trying melatonin supplements as an add on
treatment for some of their patients with depression. Right now, the evidence for the usefulness of
melatonin is not strong, but it appears to be safe enough for patients to try if they are interested.